Ideally located near Rome, the Cerveteri necropolis is a UNESCO World Heritage Site, since 2004,  only 20 minutes drive from Bracciano. 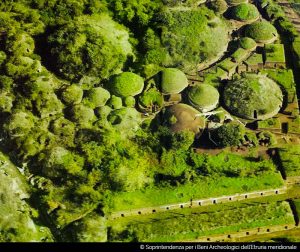 The Cerveteri archaeological site is one the most important Etruscan burial ground in the Mediterranean basin, extending over 990 acres.

Situated in northern Lazio, it offers numerous necropolises, spread as per  the Etruscans’ urban grid, including streets, squares and neighborhoods.

It is a significant evidence of the ancient Etruscan Civilization, the only urban civilization of the pre-Roman Age.

The necropolis complex, known as la Banditaccia, consists of several tombs dating from the 9th century BC to the later Etruscan period, 3rd century BC, and stretches for more than a mile.

There are two types of tombs from the later Etruscan period: the tumuli-type tombs and the so-called “dice”.

The painted tombs describe Etruscan everyday life, such as their ceremonies, mythology showing their artistic abilities.

The necropolis tombs are different from one another, depending on the techniques used and on the age they were build. The typology was also related to the family’s status to whom they belonged.

The Tomb of the Greek Vases stands out among the painted burials. It is reachable through a corridor remembering an Etruscan temple.

The Tomb of the Cornice is also noteworthy. A walk  leads to two smaller rooms featuring funereal beds. Then, a large central room connects to three other important funerary rooms.

In addition, the Tomb of the Capitelli (also known as the Capitals of a column) features a flat roof, an exact copy of that one of the Etruscan home, made by support beams of oak and reed.

Also the Tomb of Reliefs, discovered in 1847 is  a unique example of an Etruscan tomb featuring decoration with stucco reliefs instead of the usual frescoes.

According to the inscriptions found inside the chamber, the tomb belonged to the Matuna family.

In addition, some objects like ivory folding chair and horns symbolize the Matuna family’s power as magistrates.

For any further information and reservation:

On the public transport page you will find info about how to reach Cerveteri.