Anguillara Sabazia also dates back to the Middle Ages and extends on the southeastern shore of Lake Bracciano, just 19 miles northwest of Rome. It is the most populated of the three towns facing the lake. 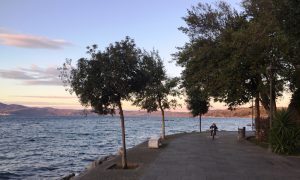 The town is divided into two parts:  the ancient area on the promontory, and the new area, developed around the railway station, contributing to its urban sprawl, that I don’t like.

One of Anguillara’s landmark is Santa Maria Assunta church, totally rebuilt in 1763, raising on the highest point of the tufa promontory.

In addition, I suggest you to visit a Neolithic village dating back to around eight thousand years ago, submerged by the lake during the rainy period.

This village is located near the river Arrone, in the Marmotta area, and is considered the oldest settlement on the shore of the Neolithic of Western Europe.

Noteworthy finds were recovered, including five pirogues, during some underwater archaeology operations. One of them is kept at the Luigi Pigorini National Museum of Prehistoric Ethnography.

You can also visit the Neolithic Exhibition Center of Anguillara Sabazia where you will find a 9.50 meters long pirogue, originally split into two parts, and found in 2005 at a depth of 12 meters.

At the A. Montori Museum of rural and popular culture you will see work tools,  machines, as well as documents on the history of Anguillara Sabazia.

The museum is located in the Torrione Orsini, a medieval tower in which, along with a bastion, there is a door of the sixteenth century, the original entrance of Anguillara.

Various festivals and events are organized all year around to promote tourism and local products in Anguillara, as well as in Bracciano and Trevignano.

Anguillara definitely is worth a visit.  If you are in Rome do not miss to plan a trip, a weekend and why not, even a long vacation, especially during summer time.

How to reach Anguillara Sabazia:

You can get to Anguillara center by public transport by taking the regional train from Rome direction Bracciano/Viterbo and stop in Anguillara ralwaystation. Then, take the urban service bus to the central area.